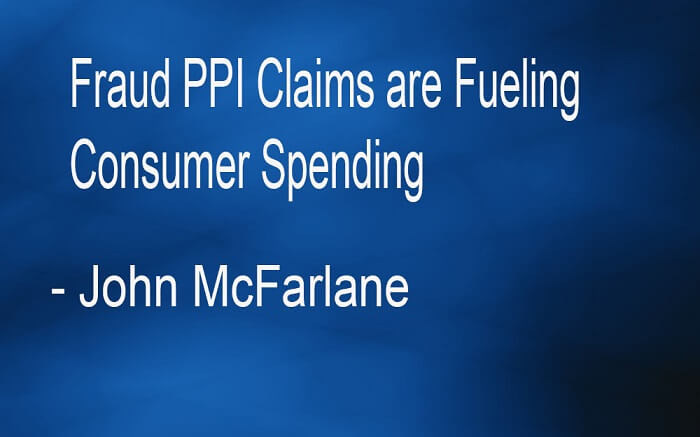 The recent statement of Barclays chairman John McFarlane has fueled the Britain’s political and business sectors; as his statement is being criticized at wide scale in all the elite communities. The bank boss John McFarlane said recently, “PPI compensation has turned the portions of Britain into fraudsters”.

The opposing reaction from Consumer champion Martin Lewis was the quick and strong, when he quoted –

“John McFarlane’s comments are outrageous. It is ridiculous to blame consumers as most of them lodged honest claims.”

According to John McFarlane, the high numbers of compensation claims are fraudulent; and the unauthentic PPI claims fuelled the consumer spending on luxuries. In an interview to Mail, going a step ahead McFarlane told,

“We have turned large numbers of Britain consumers into fraudsters”.

The part of saying that started the turmoil in Britain’s politics is – “The fraud PPI compensations were in government’s interest because it raised consumer spending.” According to statistics collected from Financial Conduct Authority (FCA), banks paid almost £30bn as PPI compensation over the mis-sold insurance; in addition, the payouts in 2019 will be more.

Adam French, the consumer rights expert, also doesn’t agree with comments of John McFarlane. He says, “The comments are like a slap on consumer’s face. Banks still have to do a lot more to restore the customers’ trust. Such comments wouldn’t help the banks at all.”

John McFarlane’s statement came in response to Barclays’ profits drop by 29% to £1.7bn in first half of 2018. Contradicting the statement, the spokesperson of Professional Financial Claims Association says that all the claims are verified by a professional management company.

The average PPI payout in the UK is £2,750; the banks and other financial institutions have set aside whopping £46 billion to cover the claims. The deadline for PPI claims is 29th August 2019. The people must lodge their complaint to the concerned financial institution, bank or Financial Ombudsman Service (FOS) on or before 29th August 2019. The borrowers need to do it at the earliest possible.

The John McFarlane’s statement harms the reputation of private lending industries in the UK also because these agencies sell no credit check – no guarantor loans at easy terms by accepting all the risk of non-repayment involved. It is true that claims for mis-sold PPI are increasing fast but all the sales channel partners including banks are responsible for this financial fraud. FCA is strict in checking the miss use of PPI; for example, it has fined several high-profile companies including Alliance and Leicester for mis-selling of Payment Protection Insurance.

Are the direct lenders in the UK making significant growth because of taking undue advantage of PPI despite the high rate repayment failure? It seems unbelievable and impractical both for the most in general sparing just the few. Yes, some borrowers claim for being unaware of having PPI but all the FCA registered leading direct lending agencies in the UK, like Huge Loan Lender dealing in variety of instant decision personal loans, provide complete transparent information on every aspect of lending and borrowing both. To be safe and at advantage side, the borrowers are expected to check the documents for PPI policy details and other information besides contacting the concerned bank to confirm whether they have PPI or not. Knowing all before borrowing is a cost saving exercise as well as it keeps the borrower stress free against any possible odd. The entire online process is so simple that the borrower doesn’t need to hire a claim management company at all; otherwise, it takes the lion share of benefit.